ESG: Invest in companies standing up for women in the workforce

The facts are straightforward: although women have earned more college or university degrees than men for over 30 years, they are underrepresented in many high-paying and prestigious jobs around the world. Fewer women are hired at entry level, then, at every step of corporate life, the number falls further.

In terms of pay, this year’s ‘Equal Pay Day’ in Europe fell on 27th February 2019. This date shows how far much further into the following year women had to work to earn what men earned the previous year.

How can ethical investors who want to further gender equality put their money where their beliefs lie?

Gender equality is number five of the UN’s Sustainable Development Goals. Lyxor, as a signatory of the Principles for Responsible Investment since 2014, is committed to making its investment opportunities as aligned with these goals as possible. That’s why in 2017 we developed an ESG ETF that allows investors to put money only into the companies committed to allowing women their share of power, influence and pay in the workplace.

Why should companies and investors focus on gender equality at all? Aside from the moral and legal duty not to discriminate, there are important financial benefits related to gender balance, sometimes referred to as the ‘gender dividend’. For one, women control around $20trn in annual consumer spending, and they are expected to be responsible for 75% of all consumer-goods buying worldwide by 2028.1 That means there is a powerful business incentive for companies to promote gender-diverse workforces that can better reflect the priorities and preferences of billions of decisionmakers.

Women in OECD countries are also highly educated: 50.7% of women aged 25-34 have a tertiary education from a university, college, or trade school.2 By underemploying or underpromoting a highly educated cohort of society, companies are likely missing out on talent that could drive material growth in their business.

And evidence does point towards a measurable impact on companies’ bottom lines. One study by McKinsey showed gender-diverse companies are 21% more likely to outperform their peers on EBIT margin, a measure of profitability.3 Ethical investing doesn’t have to harm performance.

To build an ethical ETF which allows investors to channel money into the companies most committed to equality, we chose to use data from gender equality research organisation, Equileap. In partnership with the sustainable finance group at Maastricht University, Equileap has built one of the most comprehensive databases on corporate gender equality. The research undertaken investigates large-cap companies’ commitment and actions towards gender equality, and allows Equileap to compile gender equality scorecards, reports and indices.

The gender equality index used by Lyxor is compiled by Equileap and German index provider Solactive.4 To be eligible for the index, a company must have a market cap of at least USD 2bn, be listed in 23 developed countries and be leading change on the gender equality front.

Traditional ESG metrics are also taken into consideration. Companies involved in the manufacturing of weapons, gambling or tobacco cannot be included; nor can a company excluded by the Norwegian sovereign fund. Any company in the midst of a gender-related legal case is also ruled out.

The companies are ranked in accordance with their commitment and actions towards gender equality, with the top 150 earning a place in the index. These companies are actively promoting a gender balance across every level of the workplace, from entry points to the most senior leadership positions. They are committed to equal pay and foster policies which allow employees to achieve a balance between their workplace and other commitments. Policies and training programmes that further promote gender equality within the company are also necessary, as is a commitment to openness and accountability on the issues of gender fairness. 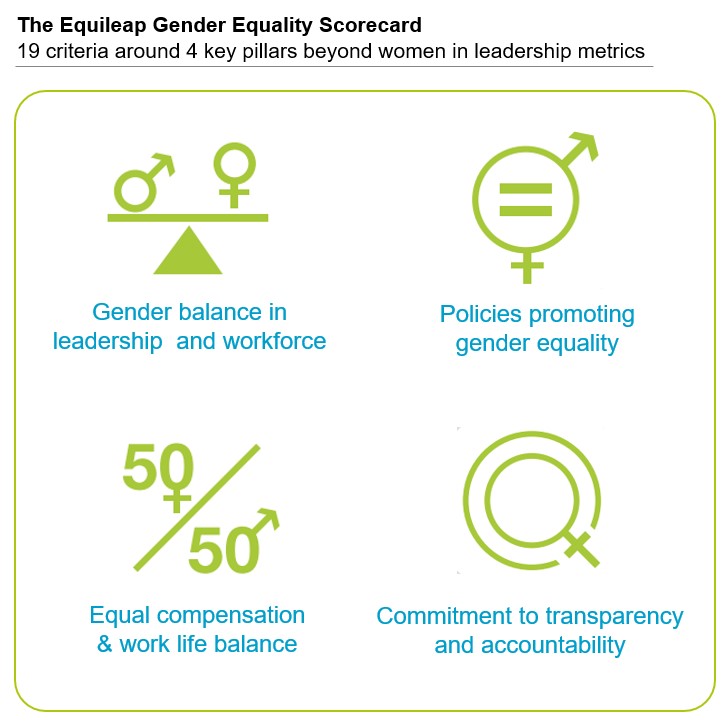 Other factors companies need to be concerned with are: flexible working options, parental leave policies, recruitment strategy, freedom from bullying, violence and sexual harassment policies. Companies in the index should also be signatories to the UN Women’s Empowerment Principles. This multi-dimensional approach goes far beyond other funds for gender equality in the market that focus just on women in leadership metrics.

Profits from licensing Equileap’s data to Lyxor’s chosen index provider (Solactive) are donated to the Equileap Foundation, a charity devoted to helping women and girls in developing countries.5

And the winners are…

Equileap recently unveiled its 2019 Global Gender Equality Report, including the companies who made it into the top 100.

UK beverages company Diageo took the top spot in the latest rankings, followed closely by Australian real estate group Mirvac and US financial services giant Bank of America. Notable achievements include a mean gender pay gap of 3% or less for Diageo, gender balance at all seniority levels for Mirvac, and a clearly defined strategy to close the gender pay gap for Bank of America.

Interestingly, a whopping 25 out of the top 100 companies in Equileap’s rankings are Australian. One potential reason for this bias is legislation dating back to 2012 requiring companies to publish comprehensive public reports on their gender equality metrics on an annual basis. Australia is a great example of how enforcing transparency can lead to real change. A similar phenomenon can be observed in the UK following the 2017 Equality Act.

Gender equality matters because when it is put into action, it can lead to tangible benefits for companies and society, including better access to leadership roles and reduced gender-based discrimination. The long-term impact of gender parity on economic growth is compelling too. Full gender equality in the workplaces of the world has been estimated to be able to bring a benefit of USD 28 trillion to global GDP by 2025.6

As well as social and economical arguments, there are also sound financial reasons for allowing women greater access to every level of a company – women make excellent workers, managers and senior executives, and studies have shown that a balanced workforce can help drive companies towards outperformance.